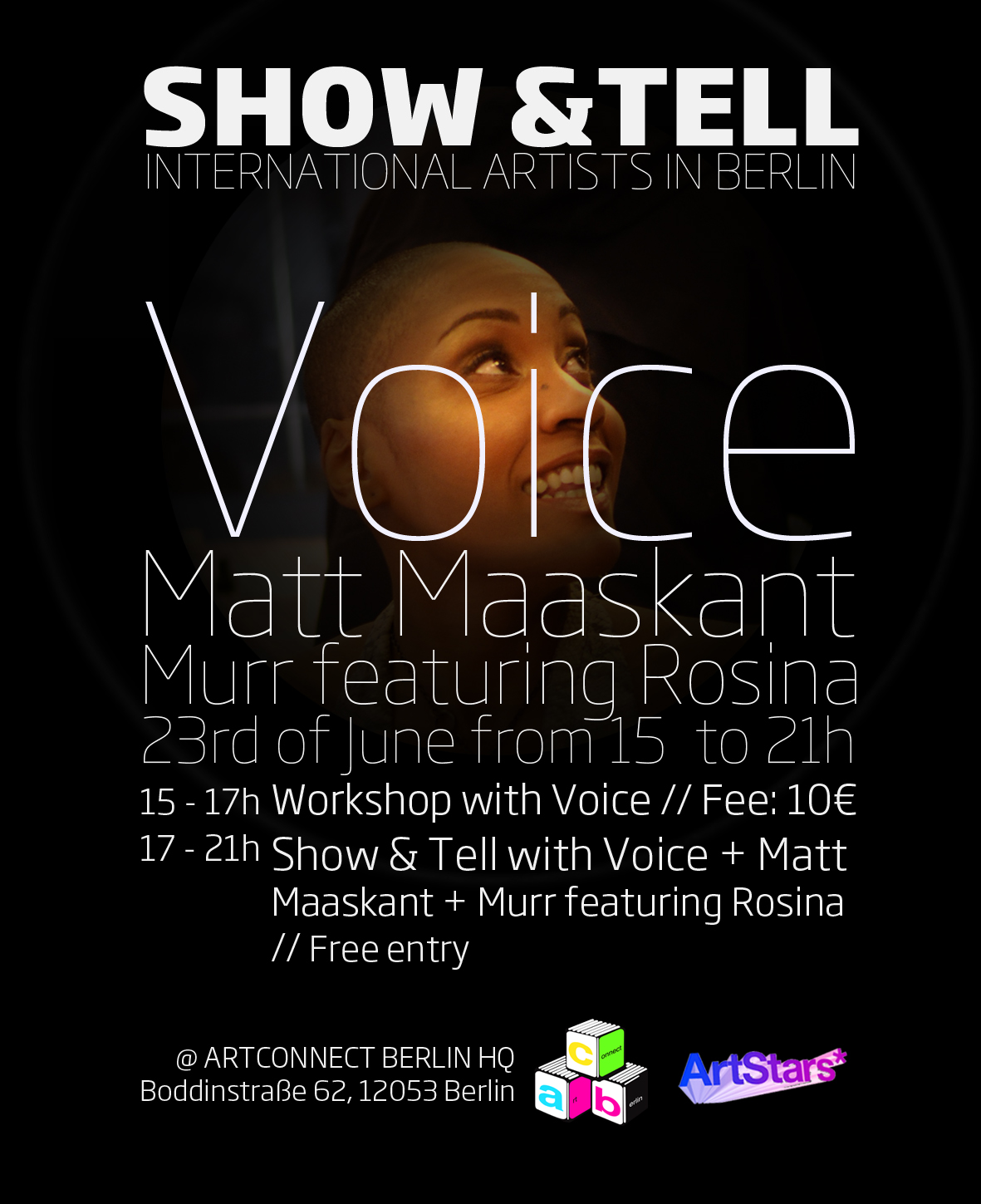 Show & Tell is a new series at ARTCONNECT BERLIN (http://artconnectberlin.com/) co-presented with Artstars (http://artstarstv.com/) which highlights a new out-of-town talent currently visiting Berlin. This month, we feature a workshop with VOICE from New Orleans and mingle with Matt Maaskant and Murr featuring Rosina over after-dinner cocktails.

TOPIC OF WORKSHOP: THE GRIOT WAY
Tap into essential tools to strengthen your skills as a creative writer, performer, student, or educator w/New Orleans based Teaching/Recording/Media Artist, Voice Monet. You will be walked through the process of how to transform your ideas into concrete forms of expression by way of the griot tradition of storytelling. All participants will have the opportunity to develop an original writing sample into a finished piece of audio art. All participants will receive a copy.

Where does Griot come from?
ORIGIN French, earlier guiriot, perhaps from Portuguese criado.
A Griot is a member of a class of traveling poets, musicians, and storytellers who maintain a tradition of oral history in parts of West Africa.

WHO IS VOICE?
www.VOICEisHEAR.com
If hip-hop was a woman, she would sound like Voice. From her topics and her beats to her sultry tone, Voice Monet is hip-hop with none of the testosterone and all of the attitude. She had just given birth to her second son when she dropped her debut album Gumbo (PTR/Featherperm) in 2006. She was studying to become a Yoruba priestess right around the time “NOLA Redux” feat Malkovich made the top of Gilles Peterson’s BBC World Wide Best Hip-Hop of 2009 list. She was teaching classfuls of New Orleans youth how to rap as an official Teaching Artist In Residence when Hope & Sorrow, the 2007 Decon/Atmospheriques release from celebrated French producer Wax Tailor, was certified silver. Between her solo releases and her collaborations with BBE, Ninja Tune, Canada’s Public Transit Recordings, UK’s Twisted Funk Records and Tailor, over a quarter of a million records worldwide bear Voice’s natural, magnetic presence, every line of every song delivered from the perspective of a mother, a lover, a teacher, a crusader. Voice is set to release her new EP CuTZ (High Bar Music) in April, the prelude to her official sophomore album Black Maria.

Matthew Maaskant (Canada): Ambient Folk
www.matthewmaaskant.com
There’s something about the reflective nature of the folk-influenced sounds and spirit you hear and feel while staring through the bottom of an empty glass that at one time or another has introduced each us to our most isolated selves. It is from this place that Matthew Maaskant delivers his debut solo album, Believe It Or Not, This Is The Place.

This new collection of temperate and reflective gems, best described sonically by the singer, songwriter and producer himself as “folktronica”, holds at its center a remarkable ability to draw listeners into themselves, though not in the ‘woe is me’ sense we often associate with so many softer, downtempo offerings. Instead, the calming moods and curious lyrical reflections heard on Believe It Or Not sweep casually from Maaskants soul in a way that brings at least a momentary stillness to your own.

LAL FOREST / Murr featuring Rosina
http://lalforest.bandcamp.com/
Formed in 1998 by the dynamic duo of poet, singer & Bengali-rooted Rosina Kazi, producer, sound designer, philosopher,aphorismist and Barbados-born king of chill, Murr, then joined later by bassist Uganda-born Ian de Souza, LAL always proved hard to describe. For 10 years they Have been perfecting this vibe and playing in places all over the world like India, Goa, Cuba & Pakistan as LAL ForestThey aren’t only a band: they’r a music magical mushroom, the visible flowering part of a much larger organism.

LAL sounds like the sum of its core components, which ultimately means it doesn’t sound like any of them. The fact that they chose to buck the all-encompassing rock and hip-hop trends to craft introspective world-music should tell you something about LAL´s level of sophistication.