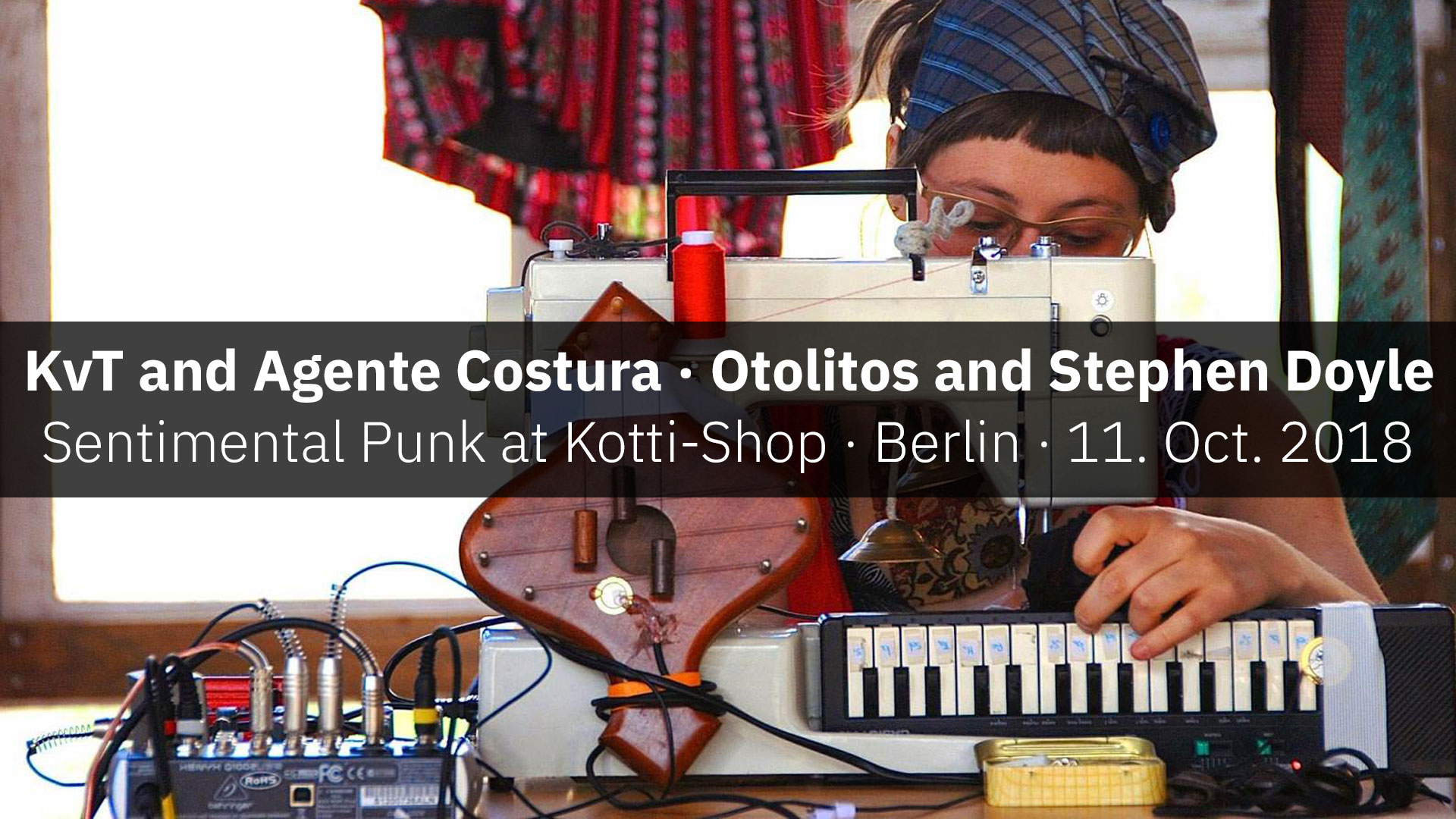 Every 11 of the month Sentimental Punk presents a selection of structuralist & avant-garde Female filmmakers.

Every 11 of the month Sentimental Punk invites 2 sound artists to interpret live the films.

Agente Costura (Berlin/Brazil)
Agente Costura is a sewing agent. She has been playing the Singer, a sewing machine, since 2003. In the daytime she tackles unwanted clothing, pins them down and cuts them up, transforming them into new wearable shapes. By nighttime, the Singer joins her fellow musicians and Lisa sews to the beat of the music, improvising on clothing based on rhythm and sound. The sewing machine is amplified and becomes a musical instrument, and new sculptural garments are created from old clothes. Agente Costura has performed extensively on an international level, including at The Vancouver Art Gallery, the Month of Performance Art- Berlin, the Bimhuis Amsterdam, Curitiba Fashion Week, among others. In 2014 she was Artist in Residence at Villa Waldberta in Munich, invited by the EU project What's the Deal.

KvT (Berlin/Ireland/Hungary)
KvT are a duo that shape ephemeral soundscapes from the overlapping churn of single simple elements — voice, resonance, repetition, movement, memory. They work with processes/sounds/movements close to imperceptibility, and transformation through layering/rhythm/pattern/repetition. Having recently collaborated with David Bryant of Godspeed You! Black Emperor and presented work on both coasts of the USA in 2017, KvT have become renowned for their ‘play anywhere’ approach, using battery-powered equipment to present work in any and all locations.

Stephen Doyle (Amsterdam/Carlow)
Stephen Doyle is a solo percussionist, living and working in Amsterdam. His sounds have previously graced the creations of Dagora, FVVSSD, The John Ew Band, and currently 78rpm. However, he also is acclaimed for his solo performances, which combine the meditative effects of repetition with the refined skill of a misspent punk youth. This allows for a playful embrace of chaotic spontaneity to overlap with an artistic curiosity about the acoustic potential of space and architecure. He has toured throughout Europe and beyond, occasionally combining musical adventures with his parallel occupation as carpenter and designer.

Otolitos (Berlin/Spain/Canada)
Otolitos is improv minimalist amplified sound by Tristen, Tom, and Angie. Someone called us ‘post-noise’. The laziest soft noise band in central Europe. We perform with drums / bass / noisebox / loopstation / projections / voice. Email us and we will come and play in your basement. xx