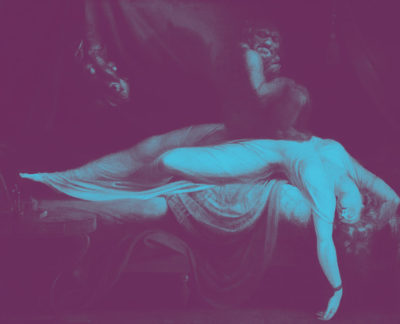 Part of the »Dreamatory« exhibiton »The Name of Shades of Paranoia, Called Different Forms of Silence« by Viron Erol Vert, curated by Dr. Bonaventure Soh Bejeng Ndikung and Solvej Helweg Ovesen within the frame of UP (Unsustainable Privileges)

Dreams in movies…How can an industry so often referred to as the dream factory show dreams? Already a small piece of research shows that the so-called dream sequences often play a fundamental part in films. Often they are in the beginning or the end of the film, initiating or concluding, if not explaining the narrative, sometimes they can be stylized and condensed account of it. There are also many movies that are (nearly) entirely set in the dream world. No matter if they are scientified by Freudian explanation or transfigured into musical numbers, they usually have the function to be the part of films, in which the (art) directors can really let it go. Often extra people are invited to shape these scenes to breathe a truly unfamiliar air into the rest of the film, visions from another world, a world the protagonists (and we the spectators) can only dream of…

With this small, entertaining and at times lunatic collage of representative dream sequences as well as scenes about dreams, we invite you to embark on a journey to the subconscious of fictional characters. From pre-Bollywood to post-modern, from Oz to Wiz, from daydream to nightmare, we trip through fog machine clouds, mass dance scenes, romantic, blasphemous or even elefantous choreographies – sometimes flickering, sometimes softly blending; sometimes absurd, sometimes abstruse; sometimes bloody, sometimes smoochy; sometime innovative, sometimes exploitative… Guided by Morpheus we dive into a parallel universe of art and artifice, and in the final consequence of an endless freedom: in these scenes, what is usually kept in the background goes out there on the screen, berserk and in your face, as do dreams themselves that »arise at nighttime and vanish by daytime«…

Kino Morph, aproximately 100 minutes, English, compiled by Yusuf Etiman, edited by Michael Amstad.
Yusuf Etiman lives and works as a graphic designer and art director in Berlin and São Paulo. Apart from his seven years film program in the Berlin project space basso which he founded, he curated film programs for many different contexts.