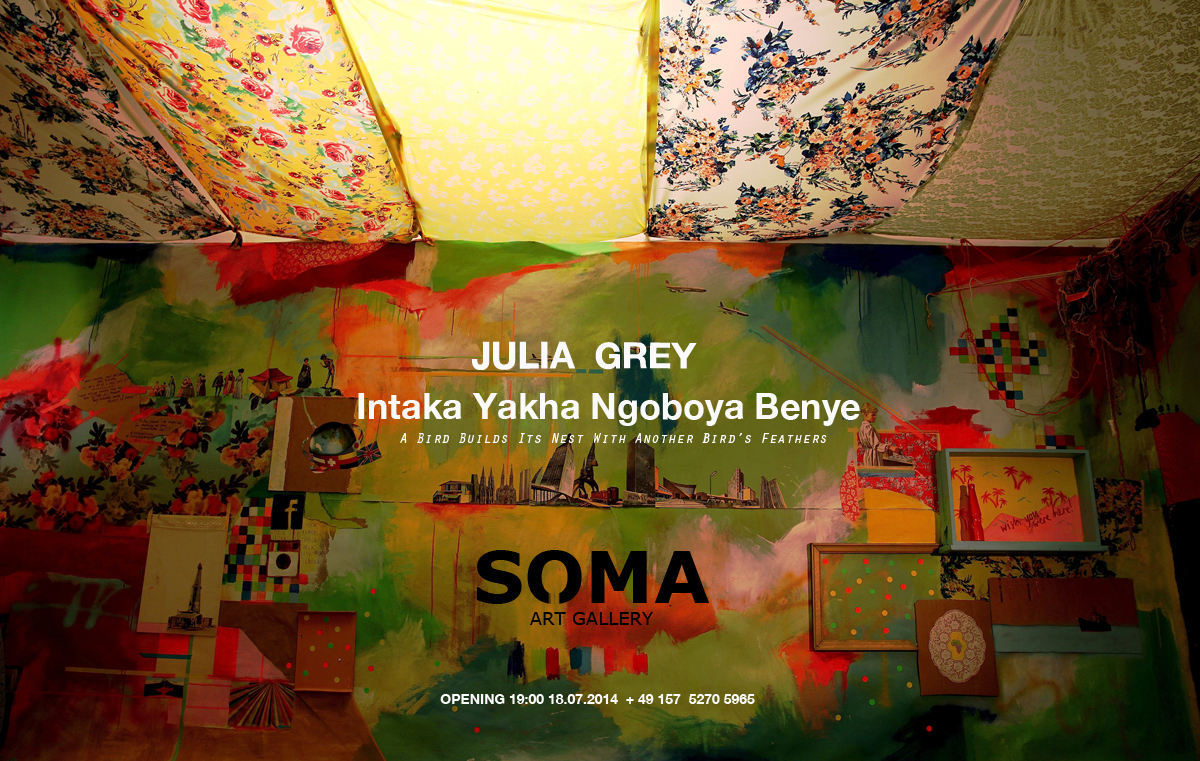 Julia Grey (BAFineArt) is a South African artist working predominantly in the medium of collage and mixed media installation. Her book Cape Town, an illustrated poem (Struik Publishing. 2005) is a full colour art journal; part travelogue and part personal manifesto involving collage, illustrations and poetry. The book is a work of self-discovery; documenting the impressions, visuals, questions and growing pains of a young person coming of age during the South African transition.
Following on from Cape Town, an illustrated poem, Julia continues to use art as a vehicle to contain emotional processing. Where that processing enters the realm of the political, Julia is interested specifically in ‘the breakdown of privilege’ as a personal narrative and requisite process for building bridges on a social level.
In Intaka yakha ngoboya benye, Julia weaves imagery suggesting the relationship between striking mineworkers in South Africa and the members of a middle/upper class who live in an economy built on the back(s) of colonialism. The work hints at the neo-colonialism that still exists in capital flight, massive income inequality and foreign control over African resources. More importantly in this instance, it highlights the remnants of imperial injustice that still exist in conversation and in personal psychology.

Artist statement.
I am a strong advocate for the political being personal. I am of the belief that one cannot affect macro change in a country, without that work also taking place on the level of individual psychology. I believe that if my particular demographic (white and privileged) were doing the requisite emotional work (checking privilege, looking at the Shadow, addressing shame, moving through one’s own pain and internal deficits, taking responsibility), empathy would be automatic. And if empathy were automatic, and the heart was sufficiently opened through real and humble self-inquiry, it would be impossible for a man to accept excessive financial reward for work that was suffered on the backs of those that historically and presently, gave him an undeserved sense of privilege.
In the wake of the Marikana massacre of August 2012, where 34 striking miners who worked for British-owned Lonmin platinum mine were killed by police forces, miners downed tools again for five months in 2014, asking for a living wage of R12 500/ 850€ (the longest strike in the history of democratic South Africa). For many members of a South African and foreign middle/upper class, perceptions of the strike begin and end with a homogenous visual of mineworkers, the likes of which one would see in television footage. Accompanying this picture, one finds blanket statements about the nation’s economy and the perceived impossibility of the strike having ever reached its target – that the demands of the working class were simply unsustainable.
In May 2014, 3 mineworkers took to the road to try and change the perceptions of the strike held by ordinary South Africans. In a bar in Observatory, Cape Town, I felt a shift in my own limited perceptions (and in those around me) as I listened to the individual stories and hardships endured by these men. The event brought together members of South Africa’s working class and intellectuals/students/creative-types in a relaxed space where there was room to share and discuss. In essence, the empathy generated in this space became a bridge and it is in this bridge, that I am particularly interested. In my mind, if our country is to move forward with significant policy that will bridge the socio-economic gulf we have inherited, the emotional ground needs to be prepared for that policy to land. It must be seen as crucial, not just for the country but for the Self/Psyche/Soul of every individual that this gulf is addressed, and soon. As one audience member stated on the fore-mentioned evening, it is important that the blame for Marikana does not just circle between police, government, mining company and union, but also be seen as the fault of a system to which we all knowingly subscribe.