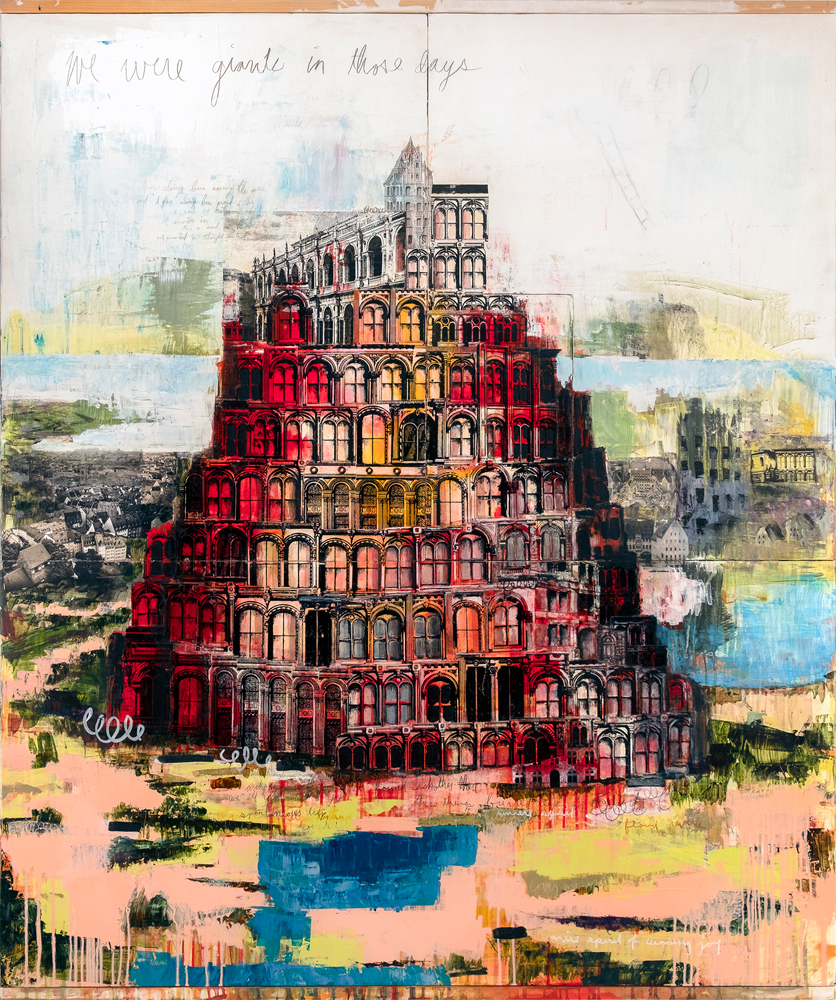 The American artist David Hochbaum and the Italian sculptor Dario Ghibaudo are both wild creators of fantastic universes born out their florid imagination and their own personal mythology and peculiar vision of world and society. The fictive reality they create, each in his own way due drastic differences of media, style, color and composition, offer to the viewer a perspective on realms populated by fantastic creatures and marvellous animals, waltzing around imaginary towns, natural places or just conquering the room space with their presence - inviting the spectator to reflect on his/her own reality and inner journey.

Masked as playful scientific catalogue the works by Dario Ghibaudo out of his series “Museum Of Unnatural History”, ongoing since 1990, truly face the theme of human condition. Animals and plants out of the ordinary, that at first sight seem recognisable, are gradually discovered from the viewer as the most exotic and improbable fruits of a wild imagination, or a genetically modified experiment, turned wrong. The anomalous is perceived more then seen, also in this case, exactly as it happens in the real natural world, as much as in human society and even in psychology. The borders of “normality” are fluid and change so radically following so many factors such as culture, religion, geography, politics, family dynamics and education, that except for some extreme cases, are very hard to set.
The collection of Ghibaudo’s weird creatures remind us of our inner weirdness, exotism and unicity as to underline that all the peculiar characteristics that makes each one of us as a unique being, are our strength. At the same time those characteristics could be the triggering excuses for all those social tensions and discriminations fruit of the human difficulty of accepting what is different and external of our own personal micro-cosmos, on a personal level as much as on the communal one. Fact underlined by the many references to the captivity of exotic animals, plants and “curiosities” - people included - collected by explorers and scientists over the centuries.
Ghibaudo gives life to his astonishing, fantastic creatures, going further than Salvador Dali, who created monstrous sculptures in bronze, just by stretching their proportions. Dario gave his animals life, skin, breath, thoughts and emotions. We believe the artist that they are one hundred percent real, thanks to the choice of the material he uses. Limoges porcelain is on of the most fragile materials used for sculptures. By choosing it, the artist tells us that the world and the existence of these creatures is fragile, they are an endangered species, needing protection and respect, as a symbolic invitation to protect and nourish ourselves and all the peculiarities making us unique.

David Hochbaum spends a lot of time photographing the places he frequented as a child and as a young man, to inject the figurative element of a specific place and time. This process mixed with the spontaneous creation in the studio allows him to recreate and reinvent his memories and his personal history, adding subtle references of current events happening to and around him.
His collages of cities and towers reflect the surroundings of the cities he lived and the places he has traveled over the years. The cities in Hochbaum’s work are at the same time portraits and landscapes, giving to the layers of architecture, the elements and gestures of humans. The people become the cities and the cities become portraits of the figures. And as mythology used to pass over the universal knowledge of the spirit of the days, the personal mythification of the artist’s life and of the people in it gives us a blink on some of the spirit of our time, rich with hopes, desires, emotions, memories and dreams.

It seems that the art of both Hochbaum and Ghibaudo are strongly influenced by the surrealists movements, but by different sides of it.
Dario Ghibaudo modellates Limoges porcelain with his hands to create the population of his bestiary, and with the exception of sporadic use of golden leaf he lives his creations uncolored. In his work we could see the selectivity of the academic approach to surrealism -the sonorous silence- like in Kay Sage’s paintings, or the grace, the refinement and the non traditionality of some of Dali's masterpieces.
David Hochbaum’s works are the result of experiments with all the fine art techniques he learned during his studies, such as photography, painting, woodworking, film and sculpture. The colors are often loud and the composition is rich of disparate elements spinning around recurring themes and subjects, subtly inviting us to recognise in them the richness and playfulness of symbolic meanings, like Max Ernst.

But the most evident art historical reference in Hochbaum’s work is the one referring to the famous painting “The Tower Of Babel” of Pieter Bruegel the elder.
Hochbaum ‘s first encounter with the Flemish painter was when he was around 7 years old while he was rifling through his mother’s books. He was thunderstruck by the detailed landscapes and colors that mirrored the over saturated whimsical worlds of children’s books such as the work of Richard Scarry, which he obsessed over at this time of his life. The moment when he came across the image of The Tower Of Babel and The Triumph Of Death is what the artist refers to as “The moment I came online in terms of recognizing an overwhelming emotional response to art and realizing its potential power to move.”

Decades later Hochbaum continues to reference the Flemish artist through color and structure. With this influence he builds his own narrative through his manipulation of concept, media and infusing his own personal journey and contemporary life.