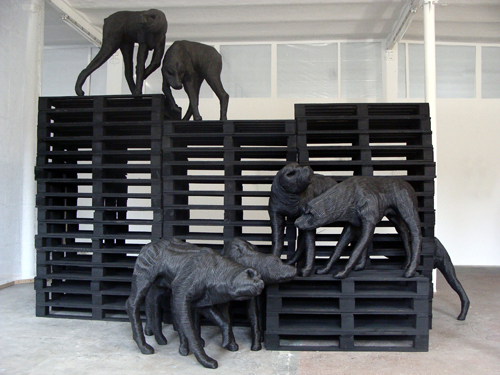 Galerie Rolando Anselmi takes great pleasure in hosting Analgesia_Nero, the first solo show of the artist Paolo Grassino in its space in Kreuzberg. In the first room the public come across a macro sculpture where a herd of black dogs without ears or mouths appears to be guarding an abandoned mound of wooden pallets, creating a wall to separate and divide. They have lost the senses and their only aim is to defend the ground with their physically presence, waiting for a threat that will never come. This scene might be a wake-up call, a prophecy of a future when the remnants of our civilization are recuperated and guarded by nature again. Analgesia is literally the alleviation or the absence of the sense of pain without loss of consciousness. The artist incites us to reflect on our own position and on how we're inclined to remain in our comfort zone of consumerism that obscures our awareness of the alarming situation we're actually in. Behind the wall we encounter a group of sculptures realized by the artist in the last years, such as Trappola (2008) and Travasi (2007). With his skillfully worked sculptures, which are made by different material such polystyrene covered with synthetic sponge, resin, concrete and aluminum, Grassino traces the possible boundaries of a complex and oneiric narrative reflection on the political and cultural conditions of mankind and modern society. 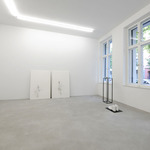