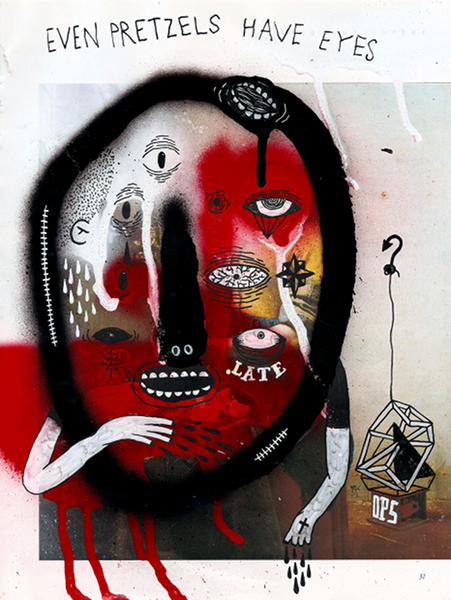 Opening on Saturday 16th January 19h30  with Braintheft Dj Team
Even Pretzel have eyes (#666), is the new irreverent solo exhibition by the controversial Italian artist Michele Guidarini. Michele is a graphic designer by day and artist by night, with a pretty dark but totally ironic aesthetic. All symbols and icons of our time are the sacrificial victims of his pen and humor. We are a LOGO based community after all. From religion to politics to ideology to private people. Michele takes advantage of what has already been exploited and squeezed by society. The principle of POP art: by misrepresenting a masses product and giving it new life throughout fantasy, people are left puzzled, they cannot find a meaning, they do not understand why but ask themselves questions and they get interested into new ways of interpretation of things. So better not trying to understand why Michele used this or that symbol, why he placed a swastika or a crucifix in his work, they’re just Logos. Why even Pretzel have eyes. The real provocation in his work is the complete freedom of interpretation he lets to the public. Michele believes in human strength, in talents, in gestures. He believes that everything, good or bad whatever it could be in life, depends on ourselves and in our way of interpreting. Something can be hilarious for someone and outrageous for others, doesn’t matter, our personal reaction is left to our self analysis. Anyway it will be very hard for what he wants truly communicate to appear clearly in one picture, either because the story itself is very complex and codified in a sequel of more images, either because not always a personal logic is present. The technique used is a mixed media of pens, ink, Magic Markers on paper, spray and collage. Inspired for his whole life by the works of Bacon and Goya, Michele Guidarini started following Low Brow attracted by the catchy aesthetics: «I think as a graphic designer, so the image, the balance, the colors are really important for me. After the first glimpse of wonder, i found out that this artistic flow isn’t trivial at all and there is a lot more under the shiny colors, a whole universe of hidden meanings. It’s a reflection of the artist and the world in which we live in, a reflection of the soul, heart and pain». Rolling Stone Magazine and lot of national and international press introduced him as one of the greatest Italian young talents, exactly for his capacity to get and mix all aspects of life, light and heavy, dark and bright, drama and comedy. Curated by Luisa Catucci
Cell63 Artplatform
ALLERSTR. 38 | 12049 BERLIN | U8 LEINESTR.
Monday to Friday 11:00 - 18:00
+ on appointment