End Of The Year Party | Disconnected by William Rudolph Faulkner

END OF THE YEAR PARTY

Berlin Glas is delighted to invite you to the end of the year party, presenting new works by our team member William Rudolph Faulkner.
Disconnected is a showing of new glass jewelry works from William Rudolph Faulkner. Combining traditional methods of glass forming with contemporary concepts of jewelry making, Faulkner explores the implications of people that group together and separates from each other. The work on display will show the transformation a form goes through when becoming an abstracted version of original ideas.

William Rudolph Faulkner received a BFA in sculpture from San Jose State University in 2008 before receiving an MFA in Studio Glass from Southern Illinois University Carbondale in 2013. He moved to Germany and continued his education at the Hochschule Trier in Idar-Oberstein where he received another Masters in Edelstein und Schmuck (gemstone and jewelry design) in 2016. He is now living and working in Berlin as a freelance artist, gaffer and instructor at Berlin Glas. 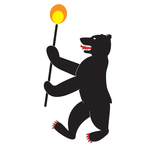