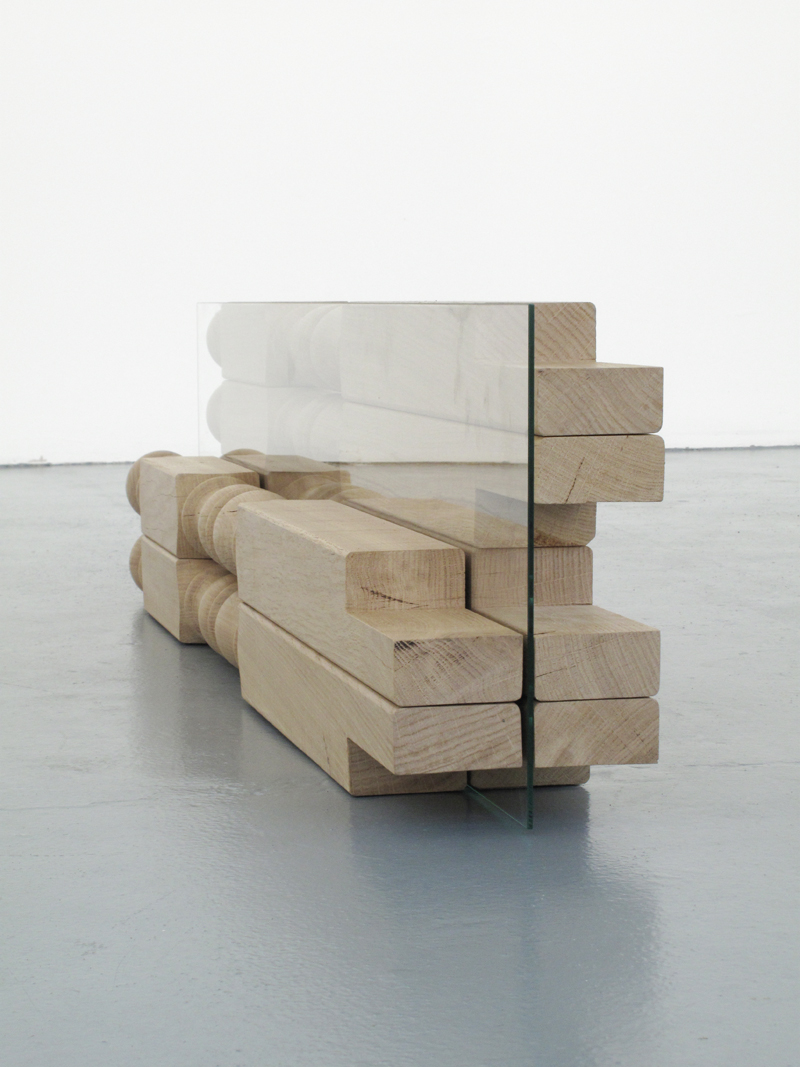 Galerie Rolando Anselmi is pleased to announce No Flock for Blind Shepherds, the second solo show in the gallery space of Davide Balliano, curated by Timothée Chaillou. For this occasion the artist will present a new group of sculptures made mainly of wood and glass. The use of these basic materials evokes an overpowering nature, being wood a live material and glass an ambiguous one, which gives the impression of being light, armless and delicate, while being potentially dangerous and harmful. Like also nature can be. The artist composes the entire show as a metaphor of an emptiness, aiming to describe hidden aspects of humankind, through its own absence. The wood panels hanging on the walls may remind us of empty icons, carrying the absence of something precious that was there and now is gone. They stand as silent references both to architecture and to nature, ruins of a monumental existence that was once complete and it's now divided in everlasting fragments. They are relics of the past still carrying echoes of known forms. The sequence of sculptures, lying on the floor in the main exhibition room, is characterized by an alternation of wood and glass in a constant game of reflections, symmetries and transparencies. The pillars-like elements carry an innate meaning of backing and separation, accompanied by the presence of a fragile core, at the same time sharp and dangerous. As the artist declared: "The title itself, No Flock for Blind Shepherds, is a reference to the impossibility of understanding without having a clear picture of all the needed elements. A sort of curse that oblige us to try finding our direction while having to discover the meaning and needs of this path ". In the last show at the gallery the artist presented a site specific installation combined through the use of different media (sculptures, drawings, paintings), now every trace of figurative representation disappeared and only the sculptures are left in the space as an architecture of ruins. Fascinated by geometry as a tool of translation and through a language made of archetypes and architectural symbols, Balliano continues to explore the dark side of our existence, investigating the concept of time and the perception of it, with a rigorous and essential approach.

Davide Balliano was born in Turin, Italy in 1983. In this city he began his studies and earned a Bachelor in Graphic Arts. In 2002 he moved to Milan where he earned a second degree in Photography at the c.f.p Riccardo Bauer.

From June 2004 to June 2005, Balliano was a resident at Fabrica, the artists' residence of Benetton group. Through an unemotional and minimal use of different media (drawing, installation, painting and performance) his artistic research allows him to delve deeply into the most hidden aspects of the human mind, revealing their fragile structures and contradictions.
Balliano’s works and performances were shown at The Artists Space and PS1 Contemporary Art Center in New York, The Watermill Center in South Hamptons, Plymouth Art Center in Great Britain, as well as in New Zeland, Japan and all across Europe. His portfolio has been exhibited in the Archive of Via Farini for the event "No Souls For Sale" at the Tate Modern Gallery in London and he was one of the winners of the AOL 25 for 25 Award 2010. In 2012 he held a solo show at Galerie Rolando Anselmi in Berlin and presented his performance “Sono Legione” at Madre Museum Napoli. In the same year he was also appointed as one of the 2012 Kempinski Art Programme fellows. In the current year he presented "Picatrix", his first show in Paris at the Galerie Michel Rein, curated by Eugenio Viola. He currently lives and works in New York.